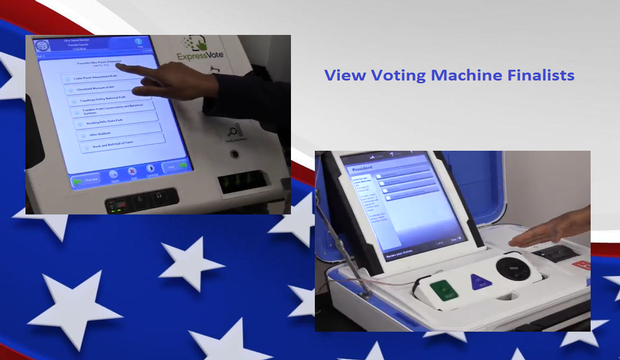 As part of efforts towards an easy voting at the November 6, 2018 elections the Franklin County, Columbus, Ohio will be recruiting multilingual poll workers who are fluent in Arabic, Chinese, Nepali or Somali. 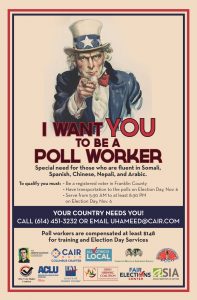 With the theme, “Your Country Needs You!” interested candidates are expected to be U.S. citizens, Franklin County Residents and at least 18 years old.”

A coordinator of the program and working in collaboration with the Franklin Board of Elections, Maria Prasek said interested candidates can fill an online form at https://caircolumbus.formstack.com/forms/pollworker or contact her at Uhameed@cair.com.

Ohio State will be electing a new governor along other legislative positions at the November elections.

The Franklin County Board of Elections Board hires about 5,500 dedicated, community-minded individuals as poll workers, to operate the polling locations each election day.

The Public Policy Officer for the Latino Affairs Commission,  Andrea Lewis will be departing from the Commission at the end of this month to pursue an opportunity in the private sector.

In a message to friends and community leaders, the Executive Director of the Commission, Lilleana Cavanaugh said, “while we are sad to see her go, we know she will thrive in her new job and we thank her for all of her contributions over the past three and half years. “

On replacement for the position, Lilleana said that, ‘We will be posting the job opening for the Public Policy Officer position in the next couple of weeks.”

According to her, “a transition plan is underway and we will continue to progress the programs and projects presently under Andrea’s leadership during the changeover period.”

“The Latino Affairs Commission is committed to empowering the Latino community in Ohio, and this is made possible through a small but mighty team of individuals who make it happen,” Lilleana added.

The New African Immigrants Commission (NAIC) will hold its regular meeting on Thursday, August 16, 2018 at the East B Conference room on the 31st floor of Vern Riffe building, 77 S High Street, Columbus,  Ohio from  1:00pm to 3:00pm.

A statement from the commission stated that the “agenda items will include plans and events for reports from committees, Chair’s Report, other topics of interest to the Commission.

It is also likely that the issue of residents from Mauritania, West Africa who are currently having immigration challenges will be discussed.

The mission of the New African Immigrants Commission is to advocate for the self- sufficiency of sub-Saharan African people in Ohio.

The Commission can be reached on email naic@ohio.gov.

There will be Eid Prayer on Tuesday, August 21, 2018 at Valley Dale Ballroom on 1590, Sunbury Road, Columbus, Ohio beginning at 8am. 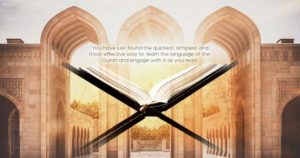 Muslims around the world are expected to mark one of the holiest day in their religious calendar. Eid-al-Adha is also known as the Feast of the Sacrifice or the Greater Eid.

The Eid-al-Adha celebration revolves around when Allah appeared to Ibrahim in a dream and asked him to sacrifice his son, Ishmael, as a sign of his faith.