Earlier the Judge has said that, the “51 are about to add a new vigor and vitality to this country.” 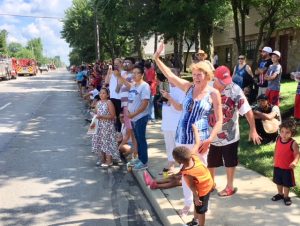 “Petition of those present is hereby granted,” the Judge delivered.

All the 51 countries became one nation in the United States of America within the two hours of the ceremony.

In his appraisal of the naturalization, Ayodele Abdulmuizz, originally from Nigeria said, “I feel great. It’s an accomplishment.”

Also, Ankur Kansagara, originally from India, and serving in the US Army said, “I feel really good. Now I am happy to be serving my country.”

Few days after the Columbus naturalization, the U.S. Citizenship and Immigration Services (USCIS) announced the celebration of the 242nd anniversary of the Declaration of Independence, and America’s birthday, by welcoming more than 14,000 new citizens in nearly 175 naturalization ceremonies between June 28 and July 10.

“The naturalization ceremony marks the end of the journey toward citizenship, just as it marks the start of new lives as American citizens,” said Director Cissna.

“We are humbled to be able to share in this moment of pride, joy, and personal triumph.”