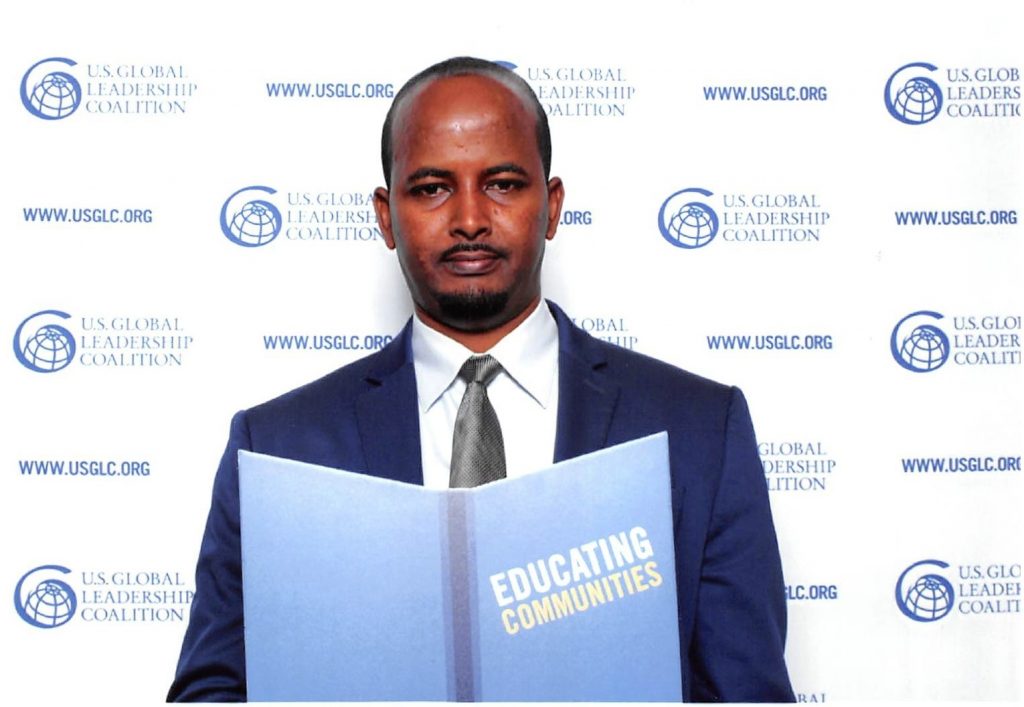 Jibril Mohamed checked his work schedule, ticked the accomplished ones and made some calls to confirm invited guests to the Somali Graduation and Scholarship program in July 2018. This is a typical day for the City of Columbus commissioner and Ohio State University professor, who is currently working on his Ph.D. He spoke with the New Americans on his works and dreams: –

I am a Somali professor at the Ohio State University where I served as the faculty adviser for the Somali Students Association. I also serve as the director of Somali Community Access Network (SomaliCAN), a community development organization that facilitates the economic, social and political incorporation of the Somali community and other New American groups in Ohio. SomaliCAN’s 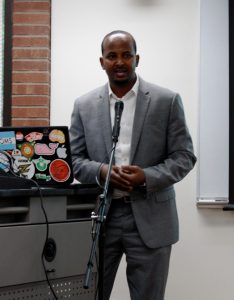 signature programs include the Somali Graduation and Scholarship program which awards 11 scholarships to high school graduates every year. I earned my Bachelor’s degree with honors at the at the University of Nairobi’s School of Economics and my Master of Public Policy and  Management at the John Glenn College of Public Affairs at the Ohio State University where I am currently working on my PhD.

I was recently appointed as a Columbus Community Relations Commissioner and a member of the Columbus City Schools Facilities Task Force.  In addition to my local presence, I also work to support the recovery of my country of birth, Somalia, which has gone through years of anarchy and conflict. I serve as a member of the State Advisory Board for the U.S. Global Leadership Coalition and I regularly visit Capitol Hill to advocate for greater U.S. role in global affairs and an increase in the international affairs budget. I live in Columbus with my wife and children.

I came from Kenya to Columbus in 2005. The city was so welcoming that I decided to work, establish a family and pursue further education. Soon after I arrived in 2005, I attended a training workshop for new interpreters and accepted a position as a Somali interpreter with the Community Refugee and Immigration Services where I later on served as an employment counselor. I also worked as a Resource Coordinator at the Buckeye Ranch, a youth service organization and held a role in youth policy and program development in the State of Ohio. The opportunity to interact with people in their homes, workplaces, social service agencies, courts and other spaces to help them access services, find jobs and address community concerns equipped me with a deep understanding of the challenges and opportunities that confront the Somali community and other New Americans that I decided to further my education in order to have a greater impact. In 2012, I earned my Master’s degree in Public Policy and Management from the John Glenn College of Public Affairs at the Ohio State University.

It is during my college days that I founded the nonprofit SomaliCAN with the help of other prominent members of the Somali community. The vision of the organization was to serve as a catalyst for community integration based on the realization that grassroots leadership is the most critical factor in immigrant integration. Yes, there are people who have years of experience working with diverse communities. They have the knowledge but they lack the experience of living like a refugee. For instancce, one can learn the Ohio motor vehicle laws inside and out but still  face a challenge when it comes to the practice of driving a car.  People will need experience in order to become real drivers. Likewise, experience as a refugee is an advantage in providing services to other refugees.  In a recent study commissioned by the Columbus City Council, the researchers at the OSU College of Social Work concluded that:

“New Americans are more likely to reach out to Community Based Ethnic Organizations for assistance as compared to mainstream Human Service Organizations due to linguistic and cultural proximity. Therefore, investing in the development of these grassroots leaders can accelerate progress and have ripple effects across New American populations.”

With more than 50,000 Somali residents in Columbus, Somalis form the largest refugee population in Ohio and Somali is the number one language spoken at home by students in the Columbus City Schools system. SomaliCAN works to help the larger community attain greater cultural awareness push for investments in grassroots leadership/youth programs and workforce development to facilitate the economic, social and political incorporation of the Somali community and other New Americans.

Mayor Andrew Ginther appointed me to the Community Relations Commission on May 22, 2018 following a unanimous vote by the Columbus City Council.   I attended my first full Commission meeting on April 24, 2018.

The Columbus Community Relations Commission was established in 1990 to help bring civic leaders, business leaders, citizens and elected officials together on issues of ethnic, racial and cultural diversity.  The role of the Commissioner is to recommend ways and means of initiating and improving city government programs designed to eliminate discrimination. The Commission is mandated to promote the development of mutual understanding and respect among all racial, religious, nationality, cultural and ethnic groups in the City of Columbus and to receive, investigate and evaluate discrimination complaints from anyone.

It is an honor to serve my city as a Commissioner. I think I can give a voice to issues of concern to my fellow Somali, Muslim, African, black and immigrant communities. I am also honored to serve on a Commission that ensures that no person is deprived of equal services by city government by reason of discrimination.

One program now under development is the Haldoor Program, which is designed to prepare young Americans of Somali descent to take leadership roles in the classroom, in the workplace and in the community, through intensive leadership workshops with a cohort of their peers, and individualized academic advising by experts in the field of education.  Recent graduates of the Haldoor Program will then be paired with junior and senior high school students in Columbus, enabling them to make good decisions about their educational future.  Both cohorts will combine to establish the Haldoor Network, an interconnected group of young people who are passionate about and engaged in their community, and who can reach out to the wider community to solve problems, find support, and make positive changes in the world around them.  SomaliCAN recognizes the need for developing the potential of second generation immigrants, and this program will address that need.