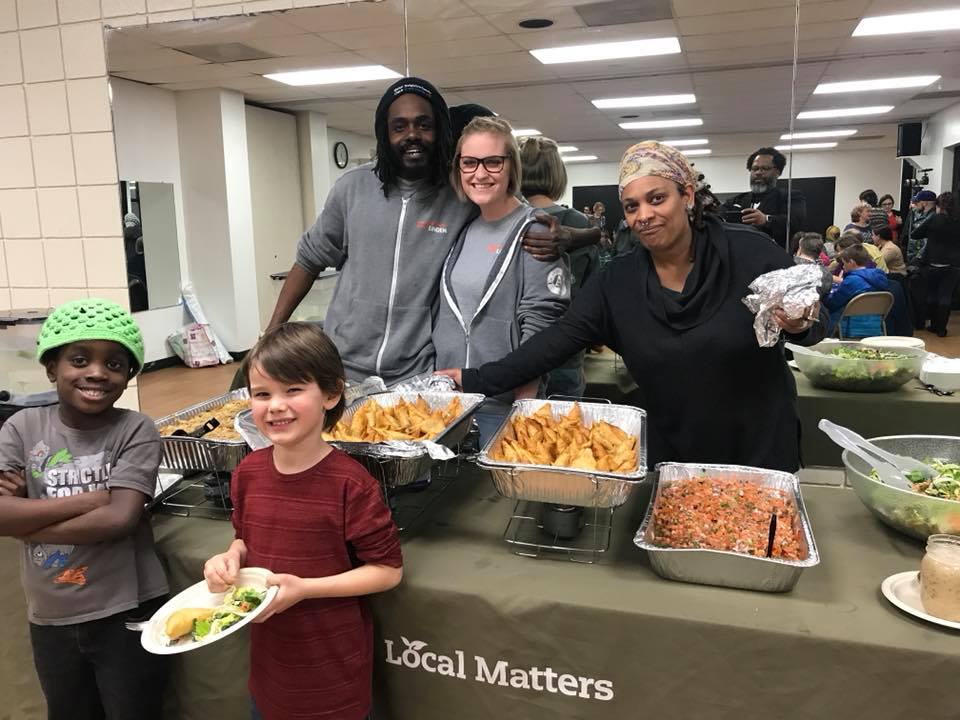 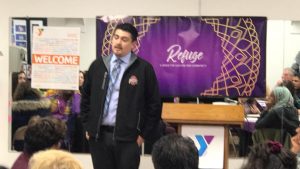 It is not often that on a Saturday night you would find fifty people from different backgrounds and cultures sharing a meal and telling stories together. McKinzi Warren would like to change that.

The event, co-sponsored by the City of Columbus Department of Neighborhoods, was part of a larger effort by Refuge to bring Columbus’ diverse community together during a time of national uneasiness surrounding immigration.

“I created Refuge in 2016 to hold community conversations, after seeing that something was missing in Columbus.  Despite being home to thousands of people from all over the world, I could not find an event where members of multiple immigrant communities could come to get to know other Columbus residents casually as friends and neighbors. I knew that if I could give everyone an opportunity to meet one another, the people of Columbus would show up with compassion and curiosity.” – McKinzi Warren

In the fifth event of its kind, participants were invited to sit with new acquaintances and ask one another a series of qu 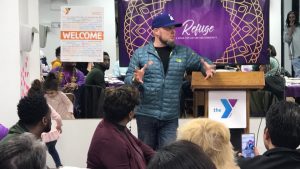 estions that explore the commonality of human experiences across different communities and cultures. In doing so, conversations and questions that can sometimes be uncomfortable had a space in which to manifest.

In the background, as meals from Wycliff’s Café and Local Matters were shared, a tree of words began to grow; using sticky notes, participants wrote down words that they associated with community and placed it upon a drawing of a barren tree. As time passed, and roots of new friendships grew, the tree blossomed into a collective embodiment of the meaning of community. Safety, food, and love were all among the words to be found.

The words that were written upon the tree contained themes and messages that are echoed by the YMCA, which donated space for the event. Malik Moore, Executive Director of Social Responsibility for the YMCA of Central Ohio, says that playing a role in such community events has allowed the YMCA to now step up and declare April 3rd to be “Love a Human Day”. On this day, doors will be open to guests to show commitment to safe spaces and community, the same kind of safe space that was showcased on March 10th. 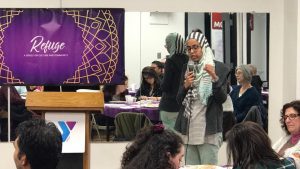 During the second half of the event, individuals were given the opportunity to stand before their peers and speak to the crowd. This time there was no prompt. Stories of immigration, hardships, love and pain were told, and in some way, a safe space was created. The sense of urgency, passion, and subtle uneasiness in the voices of the speakers suggested that these were not stories often told; these were stories that came from a special place. “The stories that people have had the courage to share, and the kind way in which everyone listens, gives me hope for our future as a community, and as a world.” says McKinzi Warren.

With 8:30 PM creeping closer, it appeared no easy task to halt conversations and end the event in a timely fashion. Members of the community lingered to connect, reflect, and embrace the stories they had just heard. After the exchange of cards and information, smiles and hugs, the conversation finally ended.

As guests exited the room of warmth they had all just shared, the brisk air of a Northland night suddenly seemed inspiring. “My life is richer and my drive to serve as an advocate, neighbor, and friend to people who have had completely different life experiences from my own is higher than it has ever been.”, says Malik Moore. In the hours previous, the strength of community in Columbus had become apparent. Columbus is a diverse, friendly, and thriving city, and the source of our successes can be found in neighborhoods because in community, in neighborhoods, one can always find refuge.