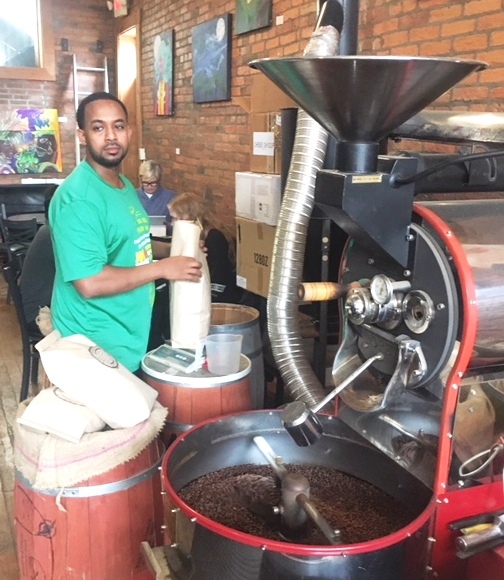 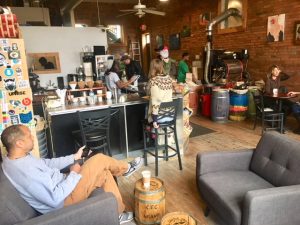 America as a toddler in January 1984, Micael Habte “rocked” between two boundaries of the home and school. He learned from parents who helped him to understand the culture and tradition of his root and at the same time in the school, embracing and assimilating the American life. Now owner of Upper Cup Coffee Company, with two outlets in Columbus, Ohio, employing 15 workers, Micael spoke with Deba Uwadiae of New Americans magazine on the compelling situation that brought up the entrepreneurship spirit out of him.

The parents had escaped the war at home in the fight for independence of Eritrea. They first sought refuge in Sudan and eventually moved to the United States, Columbus, Ohio specifically because some people from the mother’s village were already settled in the city.

Micael attended Hubbard Elementary School and Eastmoor Middle School. He also attended Walnut Ridge High School. His college education was at the Wright State University and he later transferred to the Ohio State University where I graduated in 2008 with a degree in Economics.

The 2008 world recession became an obstacle for him getting a job and it dawned on him that drastic measures needed to be taken to survive the recession.

According to him, “After graduation there was recession, job market plummeted and I had to start a research on what to do.”

Micael remembered his roommate in College that the family had about 10 coffee shops.

“While in College I learned about coffee and I worked in one of the shops for a while,” he told New Americans.

“I decided to go in that direction and open a coffee shop.”

Though Micael Habte started as a roaster, roasting coffee beans, selling and distributing to stores and coffee shops in 2010 after leasing a warehouse, his visit to a coffee farm in Costa Rica and an encounter with a coffee dealer changed the direction of his business.

“His story really motivated me in setting up a coffee shop. I told myself I was going to get a better idea of the customers and better control of the quality of the coffee if I do it myself,” he said.

Micael signed the lease of his first coffee shop, the Upper Cup Coffee Company at Pearson Avenue, Columbus in August 2011. He added the second shop in Gahanna, Ohio in May 2017.

“I said I am going to keep it organic and make it a community shop and fortunately that is what it has become,” he added.

Like everything in the beginning business was “very tough. I was working 7days a week and at least 10 to 12 hours a day. We have loyal customers and clientele base and we have good products. It really helped”.

“We try to keep different coffee based on the season. We basically keep one Ethiopian, one Brazilian, and we change the other ones like the Ugandan that replaced the Burundian which replaced the Panamanian. We try to change our coffee monthly.”

With 15 employees in the two coffee shops, Micael said, “I try to hire good friendly people. I can teach the coffee aspect of the business but I can’t teach the personality side.”

“The hardest thing about entrepreneurship is being accountable for your time. Aspiring entrepreneurs need to understand that the fact that you are an entrepreneur doesn’t mean you will work less. It means actually the opposite,” he advised.