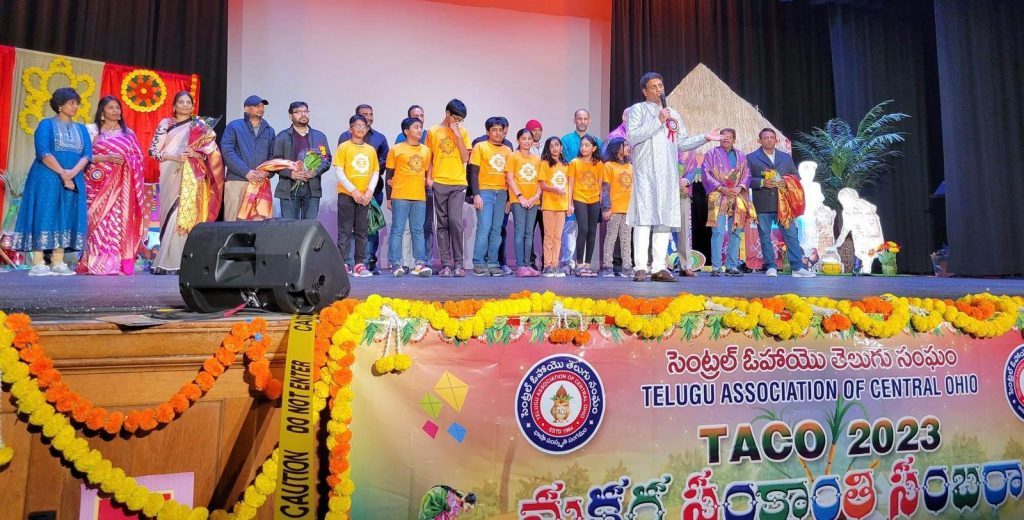 In Central Ohio, the Telugu-American community is steadily growing, and that’s why Telugu Associations of Central Ohio, commonly known as TACO, have existed for decades to bring together its community and preserve its history and culture.

India’s official languages are Hindi and English, but there are still 445 other languages spoken throughout the nation, including Telugu, the fourth most spoken language in India. More than half of those who speak or understand the language live in Andhra Pradesh or Telangana. Other Telugu communities are from neighboring states (the Southern part of India).

People from those communities and others flock to areas where there are people who speak their native tongue or who celebrate and preserve their culture, literature, art, music, dance, and traditions.

Sankranthi (Pongal), the first of three significant events organized by TACO this year, took place this past Saturday, January 21, 2023. During Sankranthi celebrations at Dominion Middle School in Columbus, over 800 Telugu Americans enjoyed a sumptuous Pongal with their loved ones while experiencing Andhra Pradesh vibrant culture and customs.

The other one is the Telugu New Year Ugadi, which falls on April 22, and Deepavali Diwali (Festival of Lights) falls on November 4. To keep families and friends connected, the TACO community hosts twelve other events during the 2023 calendar year.

“Pongal is a four-day-long harvest festival celebrated mainly in South India, and each day has its significance,” according to a TACO committee member. It is an event to express gratitude to the Sun for a successful harvest season. The event includes traditional dishes, cultural dances, attire, and music. This year’s celebration began on Saturday, January 14, and ended on Tuesday, January 17.

A significant component of this culture is its humanitarian endeavors, and the local nonprofit organization Sahara Columbus, whose organizing bodies are Telugu members, engages children in community service activities were in attendance.

“Thank you, Telugu Association of Central Ohio – TACO and Rajeev Reddy Penubolu, for providing the platform for Sahara Columbus to promote Community Service,” the founders of Sahara Columbus said. The foundation took the stage at the Pongal night, telling the audience about Sahara Columbus and its mission to make a difference in the community.

Sometimes, the public assumes that nonprofit organizations are meant for only a particular cultural group or community when they learn about them. However, Sahara-Columbus reminded everyone that they are committed to involving kids of all ages and nationalities in community service.

The TACO’s website describes its mission as “promoting friendships, understanding, and humanitarian efforts among Telugu speakers and other regional communities.” It also assists in fostering the cultural, social, and literary needs of Telugu immigrants and their children”.

Attending cultural events is truly an experience because they work hard to ensure non-speakers get an authentic cultural experience. The Pongal celebration was a marvelous display of culture and tradition put together by President Rajeev and his organizing committee, and the food was delicious. Community members and volunteers coming out in considerable numbers to wish each other good health and happiness was what made the event a success.

The City of Columbus will host its annual MLK Day March and Program to celebrate and honor the ...

By Tonya Kelly and Okon Ekpenyong If you were to ask the Franklin County Democratic Party leade ...