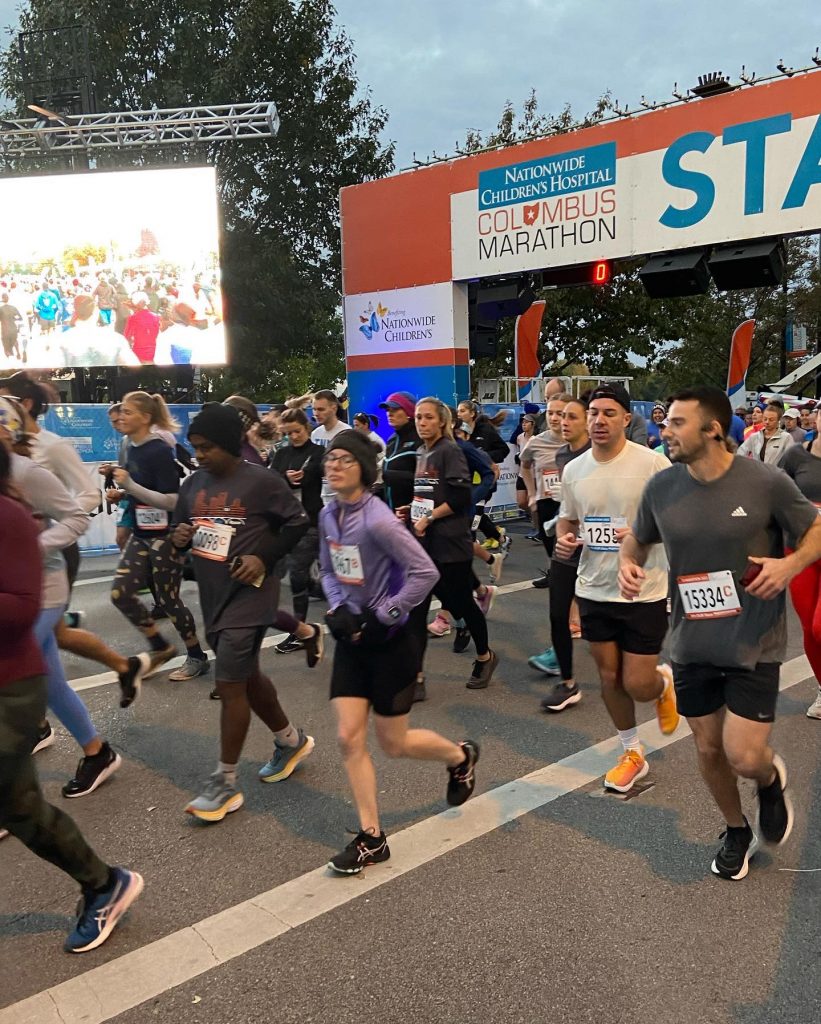 The weather at this year’s 42nd Columbus Marathon was spectacular. It was not too hot or cold, nor did it rain; it was a beautiful day to run. The race kicked off at 7:30 am, seeing over 11,000 runners pass through the start line and over 100,000 spectators, mostly friends, colleagues, and families, cheering on their loved ones prove that humanity still exists.

Running helps build strong bones, burns calories, and extends one’s lifespan. So, no matter who you are or from, it helps save lives. Running a marathon is a personal achievement; some even have it on their life bucket list. You know, the things you wish to do before leaving this earth. And no, signing up to run in a Marathon today and then running in the race the next day without proper training is not advised.

Marathon requires a lot from the heart, lungs, and muscles. So, the thoughts of running the Columbus Full Marathon, which is 26.2 miles, and the half-Marathon, which is 13.1 Miles, would require one to eat healthier, come up with weekly training, and run at least a couple of times a week.

For some, running in the race was a dream come true, a moment of reflection, or maybe a personal goal. While others finishing near the top would bring them one race closer to qualifying for the Boston Marathon, a dream for many runners.

Out of 3594 females who ran in the 2022 Columbus Marathon, Rosa Moriello of Colorado finished second in the Half-Marathon with a time of 1:11:31. “I enjoyed the race; the spectators were great.” Next for Rosa is training for the California International Marathon, which starts in Folsom Dam and ends at the California State Capitol in Sacramento.

The moment Molly Bookmyer of Columbus, Ohio, captured her 2nd Columbus Half-Marathon crown with a time of 1:10:51. She survived two brain surgeries and a few injuries, one of which kept her out from running in the 2020 Olympic trial qualifier. But despite facing adversity, the girl from Central Ohio is living out her dream.

A decade after starting to run as a college student back home in Kenya, Columbus Marathon half-marathon winner James Ngandu has inspired thousands worldwide. “Me coming back is familiar territory for me. I know where it starts and ends. Seeing the new American community coming out to show their support, it becomes a family affair,” Ngandu said.

“It is my eighth time running in this Marathon; I’ve run in the full and half-marathon,” one runner said. “My father ran many times in this race, hoping to one day qualify for Boston. I am continuing this journey for him and will get there one day,” a Columbus resident and runner said.

Kristoffer Mugrage, from Colorado, not only won the Full Marathon but also qualified for the U.S Olympics trials after finishing with a time of 2:16:11. Columbus native Sarah Biehl finished with a time of 2:39:01 to take home the top finisher for the female.

The race started at 311 West Long Street in North Bank Park, just around the corner from Lower Field Stadium, Huntington Park. For the runners, there was a chance to tour Bexley, Upper Arlington, Grandview Heights, and The Ohio State University and run through downtown Columbus, including the Ohio Statehouse, Nationwide Children’s Hospital, and historic German Village.

On Saturday, October 15th, a day before the Columbus Marathon, over a thousand people participated in the Jesse Owens 5K, honoring former Buckeyes and Olympics sprinter. Another race to cap off a great weekend and honor Jesse Owens was the 1-mile run/walk. Kids and adults ages six and up were eligible. Highlight’s Kid’s run ranging from ages 3-5, 6-8, and 9-11, was also on full display.

Overall, Columbus Marathon was not only a success, but it is one of the friendliest sporting events the whole family can participate in or even come out to cheer the runners.