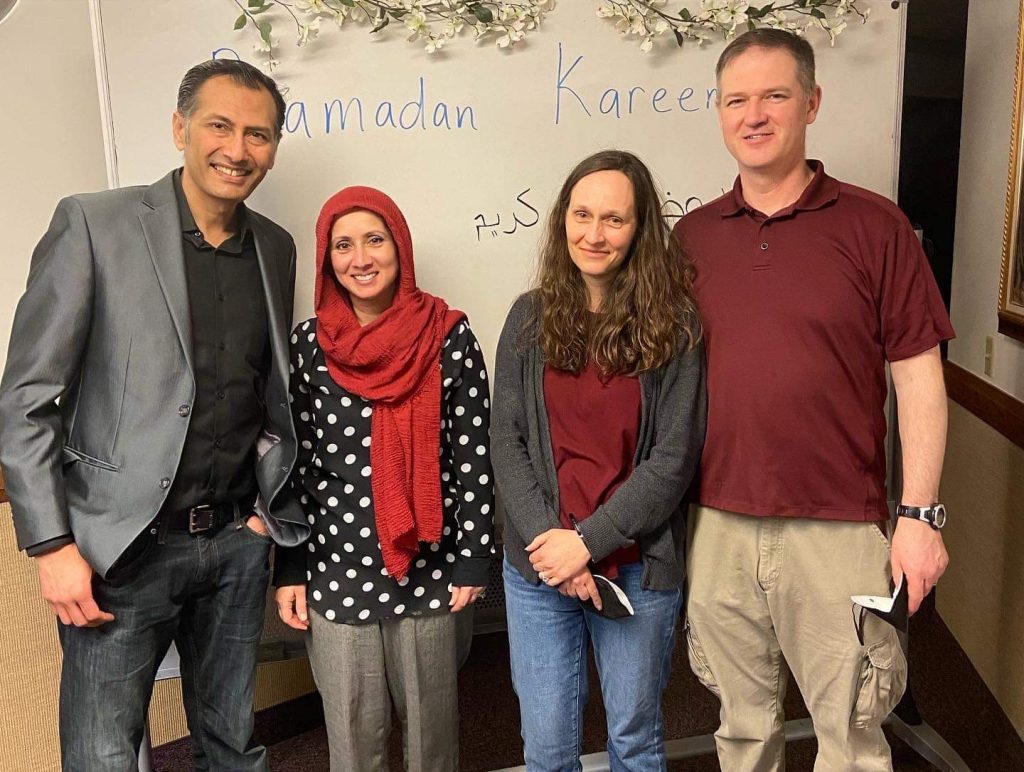 Interfaith Ramadan Iftar Dinner 2022 on April 15, 2022, at the Church of Jesus Christ of Latter-day Saints at the Gateway Boulevard in Columbus was epic on so many different levels. When two faiths come together and realize they have a lot more in common than they think, it starts a much-needed conversation. The word commonality is a perfect phrase to use when describing the night of Ramadan Iftar dinner at a Mormon church.

Members of the LDS church and the Islam faith shared a table enjoying food made by both religious faith members. They also asked questions about their spiritual paths, differences, and similarities. Members of the Muslim community had room to go pray, and the members of the Jesus Christ of Latter-Saint of Columbus on Gateway Blvd. opened their hearts and Church to a night full of togetherness.

Interfaith Association of Central Ohio brings together nine diverse faiths – Baha’i, Buddhist, Christian, Hindu, Islam, Jain, Jewish, Sikh, and Unitarian Universalist – to bring better trust, understanding, and friendship. It also helps each member to learn about other’s ethnicity, culture, way of life, language, and nutrition. Ramadan began on April 1 and will run through the evening of Sunday, May 1. College students at Ohio State wishing to get involved in their universities’ interfaith council can visit https://u.osu.edu/interfaith/ to learn more.

The New Americans Magazine caught up with Iman Malik, who is part of the Interfaith leadership and founding member of Safe Alliances of Interfaith Leaders, SAIL. He is currently serving as an appointed commissioner on the Community Relations Commission of the city of Columbus and as an appointed leader of Dublin’s Community Advisory and Inclusion Committee. Also, Brother Brandon works in intelligence and is a member of the Church of Jesus Christ of Latter-Saint; both spoke on how the two faiths came together for a special night.

During my time overseas, specifically in Egypt, I witnessed how hospitable the residents were to us, and it’s just been something I’ve been seeking to continue ever since then. We felt so enriched by the friendships of fellowship that we’ve developed with people worldwide.

We suggested doing something to mirror some of the hospitality we’ve benefited from while overseas. During the prayer times, some people came to me with questions, and I could share knowledge and explain what I understood. There’s been some learning, and you can see the tables’ enthusiasm and conversations.

There are some natural connections, and there’s some commonality about this. When researching the Church of Jesus Christ and Latter saint, there are some of the histories of the Church where the original apostles talked about the connection we have with Muslims.

People have many wrong ideas about the Church, and we don’t realize it because we are too caught up in our world to step out of that shadow and pursue our own. Some people don’t have the opportunities to step out and experience a little more, and then it becomes easier to see what we have in common rather than our differences.

Imran Malik from the interfaith network

We’ve been doing much interfaith work in Columbus for 25 years. Noor Islamic Cultural Center in Hilliard is the leader in that regard. We do a lot of celebratory events with multiculturalism and multi-tradition faith that exists in Columbus. We usually host our interfaith at the campus, which sees about four to 500 people, but we have still not opened up ourselves because of the pandemic.

We’ve been discussing with some of our faith partners, especially those who had hosted us in the past. For example, St. James in New Albany and multiple other churches, but partnering with brother Brandon from the LDS Church was new territory.

Brother Brandon and I were working on related projects, and one of the discussion items came into being to see if we could do an interfaith with LDS. We would start small and then build the momentum, and as we discussed before this event, it got very quickly formalized.

Our hope with LDS Churches is to continue building a partnership in the service-oriented model collaboration. We have pioneered interfaith dialogue and work in central Ohio and suburban Ohio. So what ideas that you know about teamwork and the leaderships partnership on the LDS side? We can do a lot more as a community together.

Our idea of faith communities working together is not of conversion or proving which you know better off than others. The idea is to understand how we work together, agree to disagree, and find ways in which we can bring the communities together. The goal at the end of the day, if faith is an action, then faith has to benefit everybody regardless of what faith you come from; we find formalities of these service work everywhere.

The success of our interfaith works in Central Ohio is to focus on the service and the commonality. We are all different, but we concentrate on humans first and any other faith and tradition. There are many more commonalities that we can talk about, such as fasting, doing charity work, community service, bringing people together, spirituality, and pleasing God.

“We are all dissimulated community; we are not a melting pot. Behind the major Interstate within the last three years, we are turning on history to help us move on and get to ordinary life because of the pandemic. We are an escalated salad bowl where everyone carries “its color” and strength, but everybody adds to the beauty of the cultural society.”

The next interfaith Iftar dinner will be on Sunday, April 24, 2022, at 7 pm at NW Mount Nazarene Church in Columbus, Ohio.

MY Project USA empowering youths to help their community prosper

By Okon Ekpenyong One young man is heading to Oxford University in London, England, to study la ...

The Nigerians in Diaspora Organization, NIDO, in collaboration with the Power Parenting® Compan ...