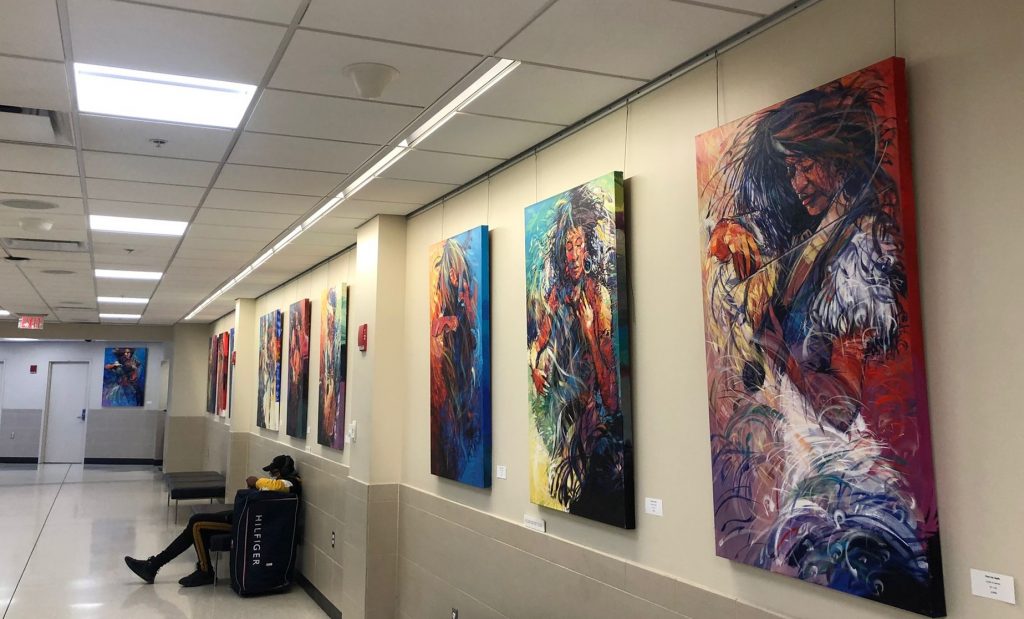 By Deba Uwadiae, with pictures by Abi Uwadiae

Raised by a father who specialized in painting and decorating houses, as a kid, Said Oladejo-Lawal would roll himself in paint whenever he was out at work sites with the dad. Inspired by the father, Said started drawing at very early age. Born in Lagos, Nigeria, he attended CMS Grammar School, Yaba College of Technology, Nigeria and the Art Institute of Pittsburgh, USA. With 20 of his works currently on display at the John Glenn International Airport, Columbus, Ohio Said Oladejo-Lawal told the New Americans magazine how America, his adopted country has been willing to hear him through his Art.

I was able to exhibit at the John Glenn International Airport because of my association with the Ohio Art League. This is the second time showing at this venue through the same group after a jury selection.

It feels great being able to accomplish this feat because it shows that my adopted country is willing to hear me as well as experience my story and my life through my Art.

There are 20 pieces at the show ranging from landscapes to figurative pieces. I will touch on some, the first one is the piece that pays tribute to the Abami Eda Fela Anikulapo Kuti, titled ‘’Zombie Oh Zombie’’, it focuses on the importance of standing in truth for the freedom that you have with boldness in resistance to its being taken away.

There is another that is titled ‘’Best find something’’ which is believing that you are entitled to something, or such is not the end of the matter but what are you willing to sacrifice in truth to achieve this goal. The painting is a homage to 2pac the rap icon.

There is a piece titled ‘’Still I rise’’, a portrait of the Poet and civil right activist Maya Angelou. This painting made in my Fauvist colors and expressionist style is an exposition of the importance of a dogged determination to stand in the face of public opposition and pressure. It makes the point that a character borne out of weightlessness of doing away with the garbage of character flaw and no self-esteem will always rise to the occasion when it matters.

‘’Love Hate Tango’’ is another piece which shows a man on a horse in an expressionist style. It focuses on a popular adage of my father that life is like a horse when it throws you, simply get back on it since it is the only vehicle you have in this existence. You cannot have the attitude of throwing in the towel at every resistance you are faced with.

A group show at the Shadowbox live and the Solo at the Airport.

Great shows at the festivals all over Ohio and Michigan

All the shows schedules will be posted on my website. www.lawalsaid.com