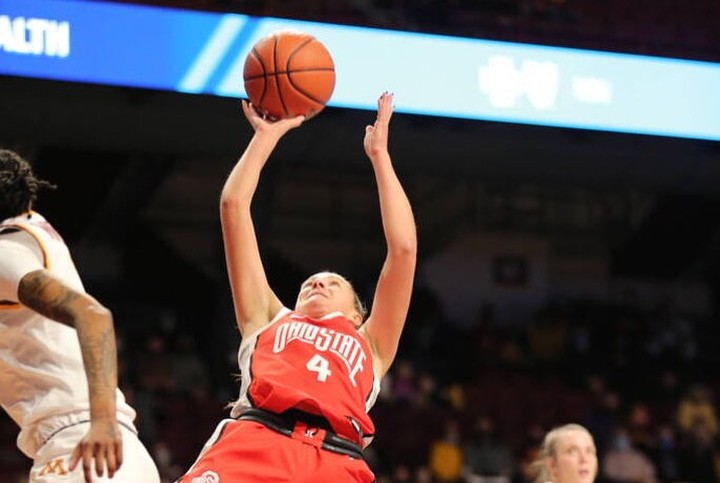 It has been like this all season during my coverages of the Buckeyes Women’s Basketball team, watching both players constantly light up the scoreboard to give the team a fighting chance and prove that they are Big Ten title contenders. Sheldon and Mikesell have carried the team on their backs and worked with other players to improve their game all season. So, when the 2021-2022 NCAA women’s basketball season is over, #4, Jacy Sheldon, and #24 Taylor Mikesell from the Ohio State Women’s Basketball, both Ohio natives, will go down as being one of the greatest duos and teammates not only in the history of Buckeyes nation but in the NCAA.

NBA superstars Stephen Curry and Klay Thompson, winners of three NBA Championship for the Golden State Warriors, are the splash brothers. That’s why their style of play has earned them a nickname, Sheldon is Lightning, and Mikesell is known as Thunder because they have been unstoppable all season for the Ohio State Women’s Basketball team. They deserve such a title because, in every sport like the NBA, there are always two or three players who make their team better and stand among the greats and giving them nicknames is to set them apart from the rest.

Jacy Sheldon wants the team to get better on the defensive side because the road to the final four is one game at a time, and a team must make necessary adjustments since each program they face does not have the same style of play. It comes down to their style of play, bringing back a winning culture to the franchise, being floor leaders, and making others around them better. “It’s easy! She’s good! She’s a great player. Taylor Mikesell can do it all – great teammate, and she keeps her defender with her, so it creates so much for so many people on the floor,” Sheldon commented on playing alongside Taylor Mikesell.

Sheldon added that “Preparation has been the key to this point, and we did a good job executing tonight. The Big Ten is a good Conference; you’ve got to be ready every night, so that is huge for us.” “We must stick to the game plan and stick to what we’ve been preparing for all season because it will be huge for us if we do that. We’ve been playing better defense, but we’ll be playing some pretty good team coming up. So, we’ve got to continue to do that, and I think it will make a difference when we find a way to play through it”, Sheldon said.

In Mikeshell’s case, it was after an outstanding performance against Illinois and Northwestern. Sheldon is in her third year with the team, but Mikesell started her Journey in Maryland and Oregon before finally transferring to Ohio State. Could you have imagined how destructive lightning and Thunder would be if they were teammates at Ohio State at the start of their collegiate career? They’ve 12 more games left to go before the Big Ten tournament starts, and we cannot wait to witness greatness at its best.